Difference between revisions of "The QA - Model"

The QA - Model is the first fully developed model, that is used for SESAM - Simulation. The model is focused on the development of software for small to medium projects. To be precise it is primary focused on quality assurance measurements. Because of this, the model is called Quality Assurance - Model (QA - Model).

The QA - Model requires a proper procedure from the trainees for filling vacancies as well as the progress and quality control. The analysis, the specification, the coarse and fine design, code, and the manual as well as the integration and delivering of the system have to be performed. In addition, all documents have to be reviewed. Module, integration, system and acceptance tests also have to be performed. The trainee is also responsible for hiring employees, assign tasks to them and release them.

The waterfall model was chosen, where this has been extended by additional structural and analytical measures. The model leaves it to the trainees to decide in which order they perform the various activities. The possible procedures in the QA - Model are shown in the following figure: 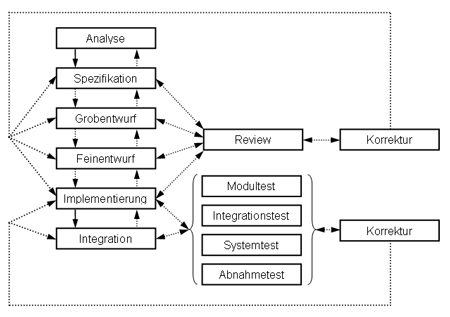 Possible Procedures in the QA - Model

The dashed arrows between the activities indicate that trainees not necessarily have to act according to the waterfall model. While there is a predefined sequence between the phases, the trainees are not forced to act like that.

However, the trainee is at least forced to create an analyzing document and to do the implementation . All other phases between analysis and implementation can be skipped. Thus, the player can not be deterred from trying the code-and-fix approach.

Furthermore rollbacks to previous phases are possible, as long as the document to be jumped, still contains errors.

It is important that the correction of a review has to be successfully completed before a new examination of the same document can be performed. After correcting as many activities as needed can be performed.